We are a Belgian energy company based in Brussels, capital of Europe, with large international (France, Spain, Denmark, Finland,

What we do is mainly facilitating solar energy projects as a total concept in which product and EPC as a service are woven as one package.

Our strategy is to use niche technology used in niche products to apply in niche markets :

Our focus is on 10 different markets worldwide:

7 of them are in fixed asset markets

3 of our markets are in floating assets:

The use of solar energy on those markets is not to power the engine of the bus, truck or barges.

The purpose is to

MWT: The Most Efficient Best Back-Contact Solution for PV

As the entire world heading for carbon neutralization to combat the grievous global warming, photovoltaic utilization is becoming more and more popular to make construction greener, or even its own carbon neutral.

Different from conventional ground-mounted PV plant, modules used either attached to building (Building Attached PV, BAPV) or integrated in building (Building Integrated PV, BIPV) prefers products with higher photoelectric conversion rate from the front side, not bifacial power generation capability which is significantly limited by the building itself. This makes the single-side PV module the best option in Commercial and Residential PV for buildings and the technical focus turned to how to increase the cell’s conversion rate, which was an eternal and fundamental issue of the entire PV industry.

Of all studied technical routes, back contact technology is considered to be the most promising solution for perspectives of single-side PV module. Not like the structure of conventional solar cell, the back contract solar cell removes all busbars from the cell front side and relocate both of the positive and negative electrodes on the cell backside. This will effectively reduce the shading of the front busbars so as to increase the light receiving area to maximum and significantly improve the cell and module efficiency level as well.

There have been three kinds of practical back contact technologies so far: the emitter wrap through (EWT), metal wrap through (MWT) and interdigitated back contact (IBC), but not all of them has big market share due to the high cost caused by complex manufacture processes. Thus far, only MWT has been achieved successful commercialization with production scale of GW level by Sunport Power, the China Jiangsu based PV manufacturer.

The MWT technology, is to transfer the current collected by fingers from the cell front side to the cell back side through the silver paste, which is filled in tiny holes with around 150 um diameter drilled by laser on silicon wafer. With eliminating the bus bars on the front side, light receiving area occupation is significantly increased by at least 3% which will result in direct improvement of module efficiency to 21%. Meanwhile, silver consumption and minority carrier recombination loss at metal electrode/emitter interface are also greatly reduced.

But the key know-how of MWT lies on how to efficiently realize the electricity “interconnection” on the back side. Like many other research teams did before, Sunport Power experimented hundreds of times of different ideas and solutions under different conditions and, eventually the company had found the solution by using the conductive backsheet as the best solution. With specially designed conductive backsheet and the MWT solar cells can be effectively connected in series to each other.

There are many other advantages for module utilized MWT technology. Because of the ultimate flatness on front surface, 2D encapsulation structure can be utilized on module production which will considerably reduce the resistance loss. And the eliminating of busbars and ribbons will terminate the welding stress which easily causes the serious cell micro-breakage. The reliability of the cell module has been improved with MWT technology. Furthermore, module operating temperature will drop by up to 3°

C and this will be helpful to the practical conversion efficiency of PV module and improve the performance of power generation outdoors.

The MWT is more than a technology, but is a platform which is compatible with most of cell technologies including TOPCon, PERC, and HIT. Sunport Power has concluded a conversion efficiency roadmap for solar cells with MWT+ with other different cell techs. For the GW capacity production scale, average efficiency of 23.45% for MWT+PERC solar cells has been realized, which is obviously higher than PERC. Combined with latest HJT, the new MWT solar cell can reach the module efficiency of 25.45% by 2022.

Sunport Power is still taking efforts in researching for better conductive backsheet for MWT to get better performance, not only on module efficiency but also on reliability. Highly committed in the PV industry, “Innovation changes the world” as the slogan, Sunport is always on the way to the next. 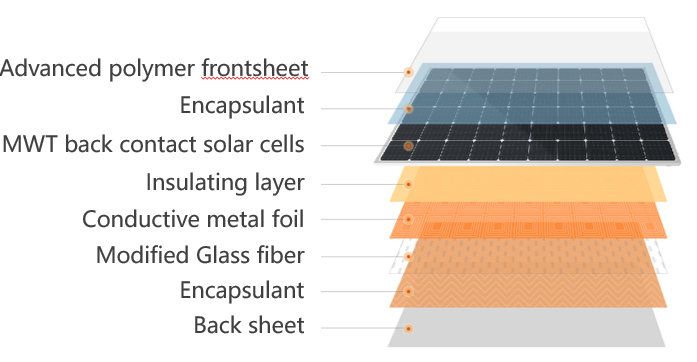